Events DCLeveraging Influencer Clout to Fire Up a Community

Events DC creates and hosts events and experiences that entertain visitors while fueling the local economy and building up the community. As the official convention and sports authority for the nation’s capital, the organization plays a prominent role in the bid to bring the FIFA World Cup to Washington, D.C., in 2026.

Events DC trusted Social Driver to achieve its goal of growing an engaged digital audience to represent DC's passion for soccer and unmatched culture. Our challenge: rally a community around the goal of bringing the world’s most prestigious soccer tournament to Washington, DC.

Kicking Up Excitement with Social Ads and Influencer Endorsement

To reach an audience of “local and vocal” advocates, we applied sophisticated segmentation tactics using the channels’ robust targeting tools. We tapped into key audience segments, including soccer fans and cultural enthusiasts. Then, our team crafted upbeat ads to build hype about the World Cup bid and entice people to follow @dc2026 for updates. Our team supported the ad launch, provided ongoing monitoring and optimization, and led community management–engaging with audiences who had interacted with paid content.

In the campaign’s influencer phase, we took a unique approach: collaborating with micro-influencers. These influencers, who have stronger relationships with their audience, offered highly curated communities that allowed us to target the exact audience we wanted. Also, they boast higher engagement rates and ROI, meaning their followers truly tune in and connect with the content they post. 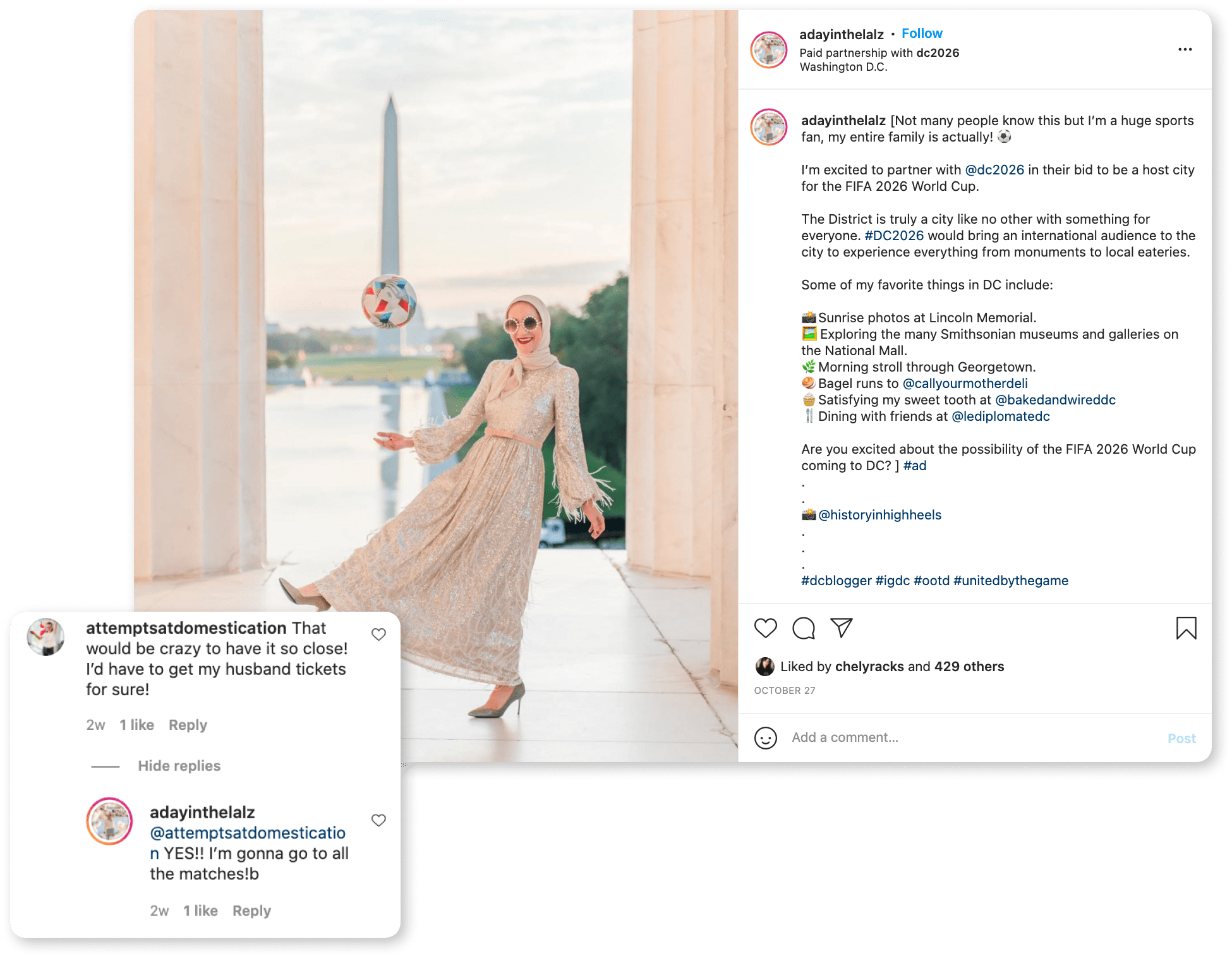 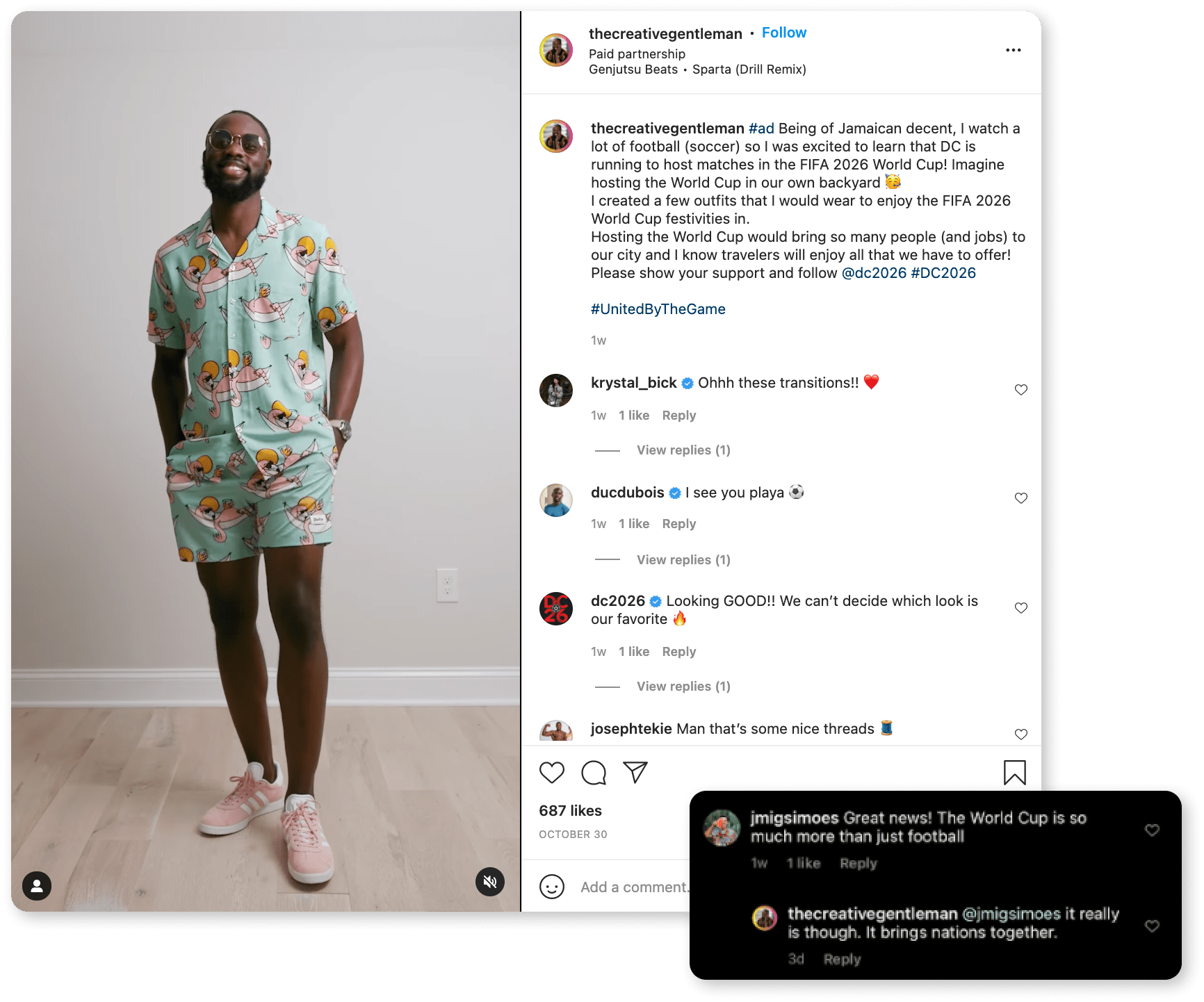 Social Driver identified and vetted DC-based influencers immersed in the local culture with followers matching our target audience. We considered everything from their audience characteristics to commonly used hashtags to pinpoint the right fit for this campaign.

With an event like the World Cup, it’s natural to target soccer fans, but our team realized this event could spark interest among the broader DC community. So, we tapped creators across a variety of industries, including sports, fashion, food, lifestyle and fitness. Widening the net helped Events DC capture more followers who were excited about DC’s bid for the World Cup.

Our team led influencer outreach, pitching, relationship management, content reviews, and community engagement. We also brainstormed content ideas that aligned with the Events DC brand, so the sponsored posts integrated seamlessly with organic content. Finally, we offered ongoing support to influencers, building a base of advocates that Events DC can leverage for future paid ad opportunities.

Active community management strengthened brand reputation and kept the momentum of the content going beyond the length of the campaign. Using the @dc2026 accounts, we liked, commented on, and shared paid ad and influencer posts to keep conversations going and further lift reach. 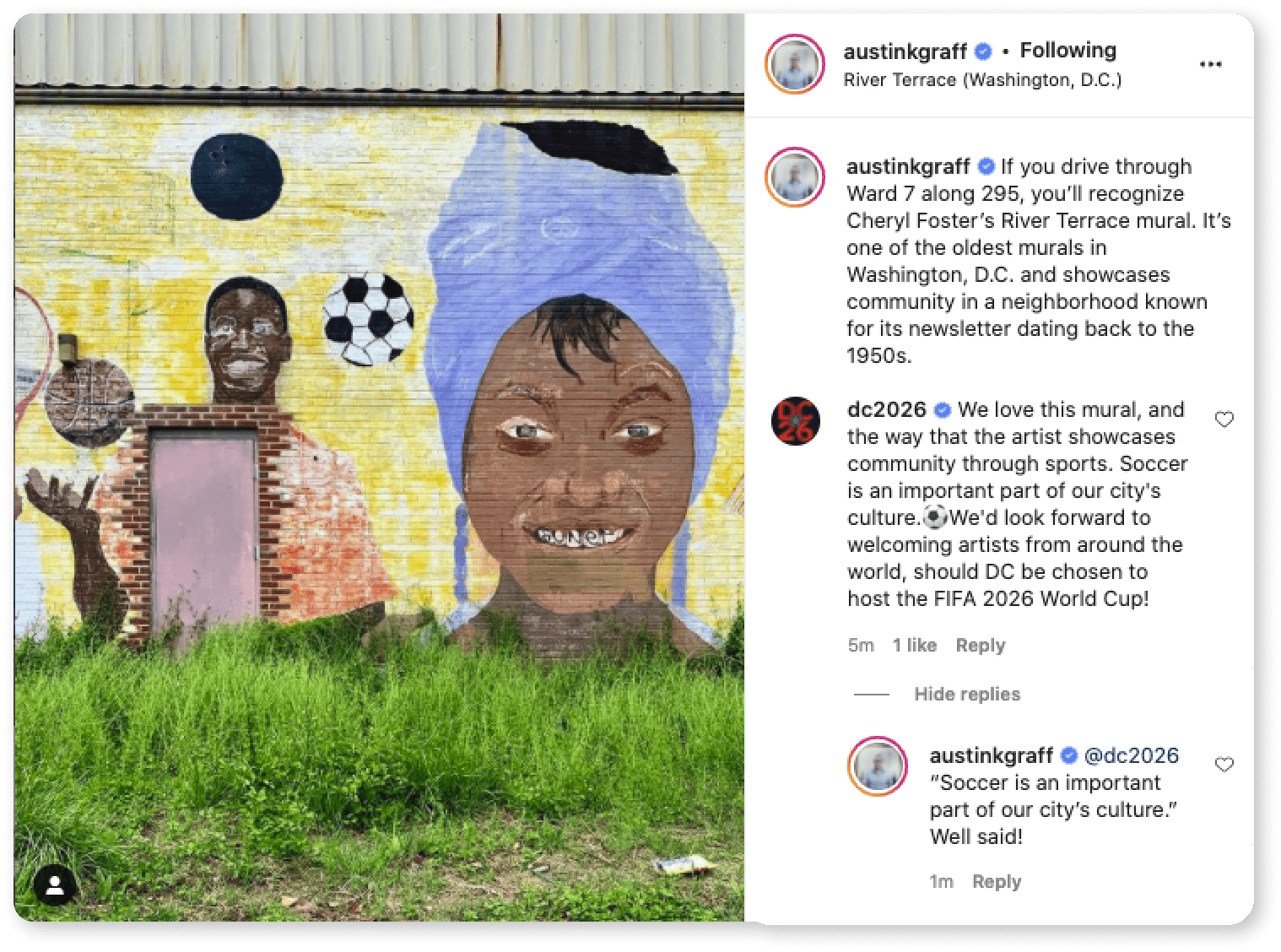 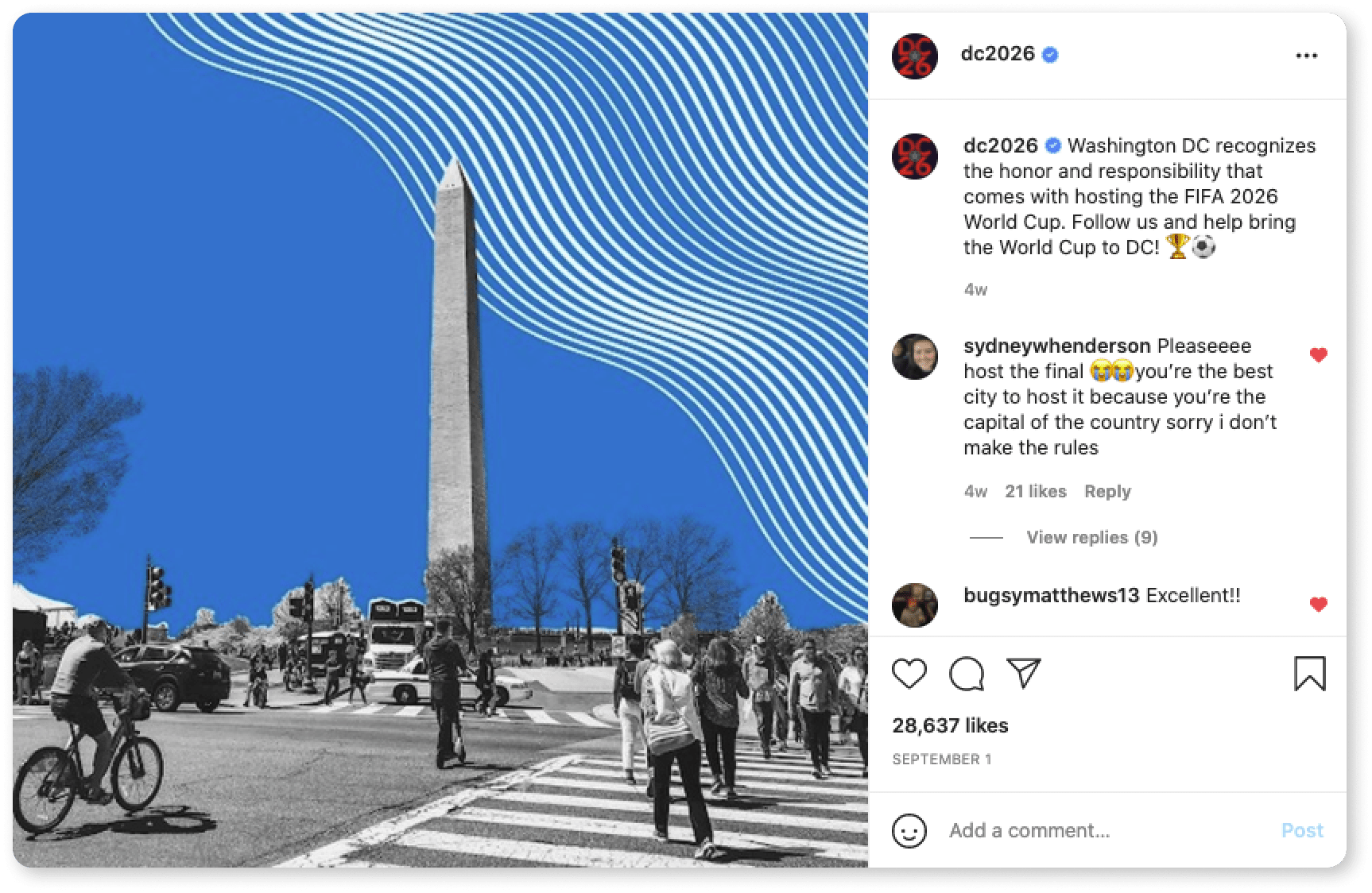 Our team created compelling ads using audience insights, copywriting and creative asset selection. The ad copy invited the community to rally behind the cause. And the visuals showcased DC’s iconic monuments–resonating with Events DC’s ideal audience as the campaign’s highest-performing assets.

Scoring a Victory for Events DC

Our strategy resulted in:

We also provided best practices for organic social media strategy and community management to foster Events DC’s newly expanded digital community. They were ecstatic with the results, which built a strong foundation to leverage in future campaigns.

The expertise, responsiveness and creativity of the Social Driver team was instrumental in our audience engagement project for the DC2026 FIFA World Cup Bid. From helping identify goals and benchmarks to project execution, the Social Driver team understood and delivered our vision for the project. Overall, our campaign was extremely successful in growing the DC 2026 audience, surpassing our follower growth and engagement goals."